2.6.2 Cantilever deformations under the influence of lateral forces

2.6.2 Cantilever deformations under the influence of lateral forces

To investigate friction, the Lateral Force Microscopy (LFM) is used. It is based on the probe lateral deflection recording during scanning. In the LFM, the cantilevers in the form of rectangular beam having length

ending with a tip having length 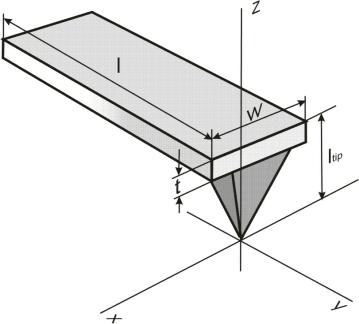 When the cantilever moves in the direction

perpendicular to its axis, the tip twists due to the friction. As shown in chapter 2.1.4 the twisting angle

is connected with horizontal lateral force

– inverse stiffness coefficient which is defined in (12) chapter 2.1.2. The optical system registers this twist as a signal

Another scan mode is available. Scanning in the

direction produces frictional force directed longitudinally that results in the vertical beam deformation (see chapter 2.1.3). In this case the angle of bend

is connected with longitudial force

Emphasize that the bend is due to not only lateral force

. Therefore, in general case, it is necessary to extend the expression (2) using formulas from chapter 2.1.3:

, both term can be the same order, because the forces ratio

is sufficiently great and ordinary varies from 1 to 100. The bend with angle

results in a signal

. For its determination one should, for instance, find the force

by others methods, and then subtract corresponding component from expression (3). Apparently, that this method is more difficult than first, in which the scanning is carried out in a transverse direction and

component can be received immediately.