The relation between detected signal and the lateral force acting in the x-direction is given by:

where calibration constant B is determined in accordance with procedure presented in the chapter Calibration of the optical detection system:

Before interpreting LFM measurements we must learn to differentiate the frictional force effect from the topography effect.

Let us examine the measured lateral forces and their relation with the frictional force. Both in the first (lateral scanning) and in the second (scanning along the beam length) scan modes it is impossible to measure the frictional force in a single pass. The reason is that lateral forces are influenced by both friction and surface topography. As is shown in Fig. 1, the normal load has a horizontal component at inclined surface features. 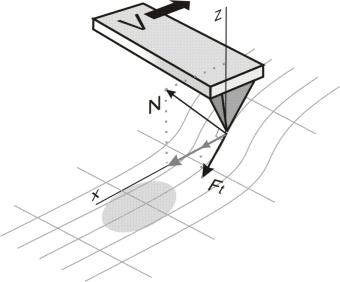 Therefore, the measured lateral forces contain information about both friction distribution and surface topography. To separate the tribological effect from the topographic effect, it is just enough to reverse the scan direction. The frictional force changes sign in this case while normal load remains the same (Fig. 2a, 2b). The difference of two scan results gives double frictional force while the average result is a sample surface topography (Fig. 2c). 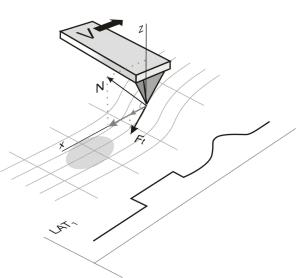 When using the LFM technique, one should remember that during measurements in the contact mode not only the cantilever but also a sample is deformed. It is "indented" which can result in artifacts during both topography imaging and lateral forces mapping.

Effective stiffness of surface features should be much more than the tip stiffness. Only in this case when "indenting" can be neglected, one can obtain true results of lateral forces measurement.