2.1.4 Deflections under the transverse force

2.1.4 Deflections under the transverse force

. Solution to this problem will give the first column of tensor

As a result of the transverse force action, the complicated deformation is induced which is a superposition of simple bending and twisting (Fig. 1a и 1b).

The solution to the problem of the rectangular beam torsion is much more complicated. Therefore, we give the formula relating the torsion angle

and applied to the beam end force moment

If the lateral force

acts on the tip having length

then torque is given by

. The tip lateral deflection is, in turn, related with the torsion angle as

, the Poisson's ratio is

To find the resulting tip deflection at superposition of simple bending and torsion it is just enough to sum the corresponding deflections (assuming that deformations are small):

(4) exceeds much the torsion inverse stiffness

(6) so normally the simple bending can be neglected. For the standard AFM cantilever CSC12 having the following parameters:

, stiffness , the lateral stiffness constants are:

Notice that besides the

deflection, both the simple bending and torsion induce the deformations

, respectively. However, the magnitude of these displacements is of the next order of smallness as compared with

and their relation with applied force is nonlinear (quadratic), i.e. "non-Hookean". We can prove this, e.g. for torsion. 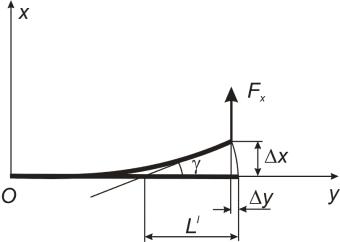 Referring to Fig. 2, we can write

. Similarly, at the simple bending

. Hence, we can suppose

Finally, we calculate the components of the matrix (3) from chapter 2.1.1 first column. The normal to the top surface of the cantilever, subjected to the transverse force

Accordingly, there is no deflection in the

arises only from the torsional deformation. At the simple bending the cantilever surface remains horizontal so this bending can not be detected and its magnitude can only be calculated. However, to determine the transverse force

experimentally, it is enough to detect the torsional deformation.