Kim, Y., Bark, H., Kang, B., & Lee, C.
ACS Appl. Mater. Interfaces 2019, 11, 13, 12613–12621
https://doi.org/10.1021/acsami.8b20714
The substitutional doping method is ideally suited to generating doped two-dimensional (2D) materials for practical device applications as it does not damage or destabilize such materials. However, recently reported substitutional doping techniques for 2D materials have given rise to discontinuities and low uniformities, which hamper the extension of such techniques to large-scale production. In the current work, we demonstrated uniform substitutional doping of monolayer MoS2 in a 2 in. wafer of area >13 cm2. The devices based on doped MoS2 showed extremely high uniformity and stability in electrical properties in ambient conditions for 30 days. The photodetectors based on the doped MoS2 samples showed an ultrahigh photoresponsivity of 5×105 A/W, a detectivity of 5×1012 Jones, and a fast response rate of 5 ms than did those based on undoped MoS2. This work showed the feasibility of real-life applications based on functionalized 2D semiconductors for next-generation electronic and optoelectronic devices. 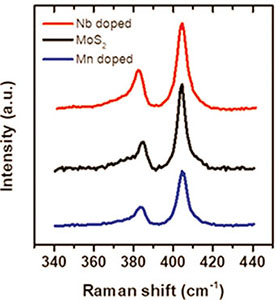 Kang-Nyeoung Lee, Seungho Bang, Ngoc Thanh Duong, Seok Joon Yun, Dae Young Park, Juchan Lee, Young Chul Choi, Mun Seok Jeong
ACS Appl. Mater. Interfaces 2019, 11, 20257−20264
https://doi.org/10.1021/acsami.9b03508
Transition metal dichalcogenides (TMDCs) are promising two-dimensional (2D) materials for realizing next-generation electronics and optoelectronics with attractive physical properties. However, monolayer TMDCs (1LTMDCs) have various serious issues, such as instability under ambient conditions and low optical quantum yield from their extremely thin thickness of ~0.7 nm. To overcome these issues, we constructed a hybrid structure (HS) by growing zinc oxide nanorods (ZnO NRs) on a monolayer tungsten diselenide (1LWSe2) using the hydrothermal method. Consequently, we confirmed not only enhanced photoluminescence of 1LWSe2 but also improved optoelectronic properties by fabricating the HS phototransistor. Through various investigations, we found that these phenomena were due to the antenna and p-type doping effects attributed to the ZnO NRs. In addition, we verified that the optoelectronic properties of 1LTMDCs are maintained for 2 weeks in ambient condition through the sustainable encapsulation effect induced by our HS. This encapsulation method with inorganic materials is expected to be applied to improve the stability and performance of various emerging 2D material-based devices. 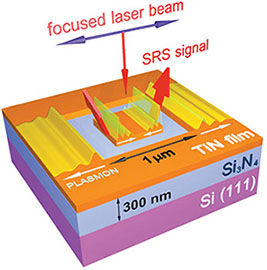 Berrellez-Reyes, F., & Alvarez-Garcia, S.
Journal of Physical Chemistry C 2019, 123(49), 30021–30027
https://doi.org/10.1021/acs.jpcc.9b09353
In this work, we study the interaction of a graphene oxide (GO) substrate and adsorbed rhodamine B (RhB) molecules by Raman spectral deconvoluted scanning. We achieved the deconvolution of a large number of spectra with overlapping Raman bands of GO and RhB. The evolution of the deconvolution parameters is shown as two-dimensional (2D) spatial maps, cross-correlation graphs, and evolution curves of the statistical representation derived from the data histogram. We show that at resonant excitation of the RhB molecules, the dye fluorescence is quenched, and the GO Raman bands are modified. We report a downshift in the G-band position and an increase in the intensity of the defect-activated D- and D′-band with a higher amount of adsorbed RhB molecules. These results will be discussed considering previously reported works on Raman spectra dependence with molecular-doped and gate-voltage-doped graphene. 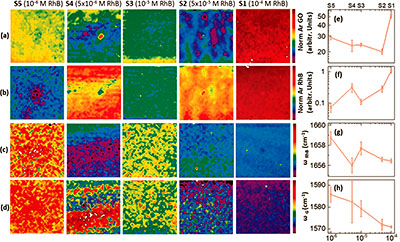 Szőke, Á. F., Szabó, G., Simó, Z., Hórvölgyi, Z., Albert, E., Végh, A. G., Zimányi, L., & Muresan, L. M.
European Polymer Journal 2019, 118(May), 205–212
https://doi.org/10.1016/j.eurpolymj.2019.05.057
Chitosan (Chit) coatings deposited on zinc by dip coating technique were impregnated with ammonium paratungstate (PTA) to improve their anticorrosive effect. UV–Vis spectroscopy was used to determine the layer thickness on glass substrates, while PTA accumulation and retention were studied on quartz. The behavior of the native and the PTA loaded chitosan coatings, along with their degradation in time were studied with Raman spectroscopy, EDS, AFM, potentiodynamic polarization and electrochemical impedance spectroscopy techniques. Impregnation has significantly lowered the swelling speed of chitosan, additionally, PTA has been retained in the coatings even after 3 days of exposure to a corrosive environment. The strong ionic cross-linking also improved corrosion inhibition effects (from 29% to 98%) of the chitosan coatings by decreasing the permeability of the layer. The Chit-PTA system can be successfully applied as a short-term anticorrosive coating, removable on demand without damaging the underlying substrate. 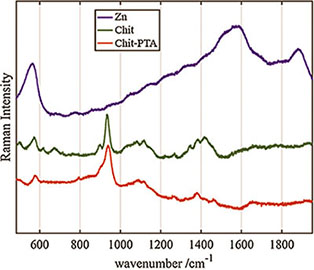 Mendoza, C. D., Maia da Costa, M. E. H., & Freire, F. L.
Applied Surface Science 2019, 497, 143779
https://doi.org/10.1016/j.apsusc.2019.143779
X-ray photoelectron spectroscopy (XPS), atomic force microscopy (AFM), Raman spectroscopy and scanning tunnelling microscopy/spectroscopy (STM/STS) were used to study the effects of a long exposition to the air moisture of the interface between graphene and Ge (110) substrate. The single-layer graphene was grown by chemical vapour deposition (CVD) directly on Ge. The Raman and XPS results indicated that oxidation occurs slowly probably due to the diffusion of oxygen containing species through short-circuits like defects and grain boundaries present in the graphene sheet, as revealed by AFM and STM. In a long time-scale, the oxidation process resulted in a decoupling between graphene and germanium and a modification of the local density of states measured by STS.

Minho Kwon, Taeheon Lee, Youngsil Lee, Jong Hun Han, Hyun-jong Paik
Macromolecular Research 2019, 27, 955–962
https://doi.org/10.1007/s13233-019-7201-6
In this paper, functionalization of graphene is conducted through click reactions for its effective dispersion. The poly(sodium 4-styrenesolfonate) (PSS) was synthesized using reversible addition-fragmentation chain transfer (RAFT) polymerization. The chain end dithioester group of RAFT-polymerized PSS was reduced to a thiol and used to couple PSS to graphene oxide (GO) via a thiol-ene click reaction. An aqueous dispersion of reduced GO with PSS (PSS-rGO) resisted sedimentation due to steric effects and charge-charge repulsion between the PSS attached to rGO. Atomic force microscopy showed that the PSS-rGO mixture was composed of dispersed particles of thin-layer (1.5 nm thick) graphene. Thickness of the PSS-rGO was close to that of GO. This indicates that there was no significant re-aggregation during GO reducing process. 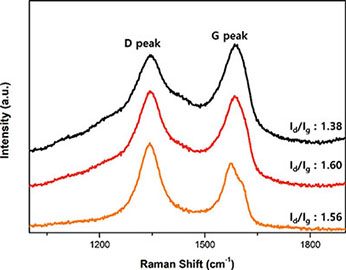 Lazarević, J. J., Ralević, U., Kukolj, T., Bugarski, D., Lazarević, N., Bugarski, B., & Popović, Z. V.
Spectrochimica Acta - Part A: Molecular and Biomolecular Spectroscopy 2019, 216, 173–178
https://doi.org/10.1016/j.saa.2019.03.012
In investigation of (patho)physiological processes, cells represent frequently used analyte as an exceptional source of information. However, spectroscopic analysis of live cells is still very seldom in clinics, as well as in research studies. Among others, the reasons are long acquisition time during which autolysis process is activated, necessity of specified technical equipment, and inability to perform analysis in a moment of sample preparation. Hence, an optimal method of preserving cells in the existing state is of extreme importance, having in mind that selection of fixative is cell lineage dependent. In this study, two commonly used chemical fixatives, formaldehyde and methanol, are used for preserving primary mesenchymal stem cells extracted from periodontal ligament, which are valuable cell source for reconstructive dentistry. By means of Raman spectroscopy, cell samples were probed and the impact of these fixatives on their Raman response was analyzed and compared. Different chemical mechanisms are the core processes of formaldehyde and methanol fixation and certain Raman bands are shifted and/or of changed intensity when Raman spectra of cells fixed in that manner are compared. In order to get clearer picture, comprehensive statistical analysis was performed. 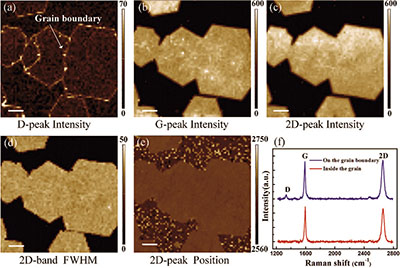 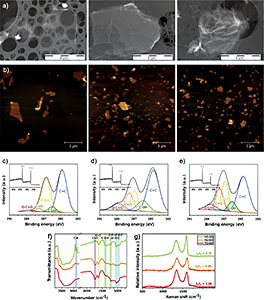 Nezhdanov, A., Usanov, D., Kudryashov, M., Markelov, A., Trushin, V., De Filpo, G., & Mashin, A.
Optical Materials 2019, 96, 109292
https://doi.org/10.1016/j.optmat.2019.109292
Synthesis of amorphous chalcogenide As-S-based films with arsenic content from 35 to 55 at. % by a PECVD method is achieved. The composition-structure-optical properties relationship is revealed. Varying the composition of the films from As35S65 to As55S45 is accompanied by a change of the dominant structural units: from AsS3/2 pyramids to cage-like As4S4 and As4S3 units, causing a considerable decrease of the optical band gap from 2.42 to 1.87 eV. It has been found out that modification by a focused laser irradiation (473 nm) leads to formation of micro/nanocrystalline inclusions feasible for applications in medicine, optoelectronics and integrated optics. The type of inclusions depends on the dominant structural units of the initial films. In case of the As55S45 film appearance of the dimorphite crystalline phase (α-As4S3) is observed. The ex-situ laser modification of the As-S films leads to appearance of a photoluminescence emission, and its maximum position shifts from 1.8 to 2.05 eV depending on the initial film stoichiometry. 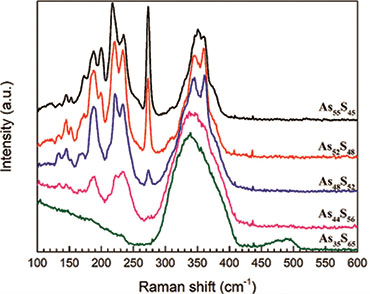 Lee, H. J., Kim, J. S., Lee, K. Y., Park, K. H., Bae, J. S., Mubarak, M., & Lee, H.
Scientific Reports 2019, 9(1), 1–8
https://doi.org/10.1038/s41598-018-37010-x
A test method for evaluating the quality of graphene flakes, such as reduced graphene oxide (rGO) and graphene nanopowder (GNP), was developed in this study. The pelletizer was selected for a sampling tool, which enables us to formulate the flake sample as a measurable sample. Various parameters were measured from the pelletized sample in order to elucidate the best parameter for representing the quality of the graphene flakes in terms of their electrical properties. Based on the analysis of 4-probe measurement data on the pelletized sample, the best intrinsic parameter is volume resistivity (or volume conductivity) rather than resistivity (or conductivity). Additionally, the possible modification of a sample before and after the pressurization was investigated by electron microscopy and Raman spectroscopy. No significant modification was observed. The volume conductivity in the two types of the graphene was different from their individual conductivities by one order of magnitude. 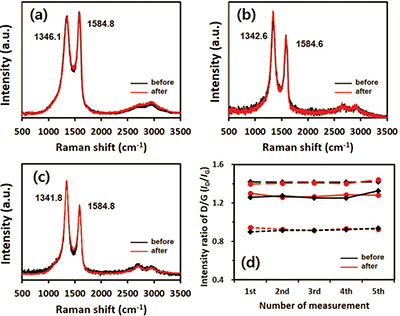 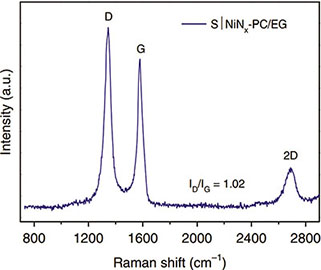 Oh, H. M., Kim, H., Kim, H., & Jeong, M. S.
Scientific Reports 2019, 9(1), 1–7
https://doi.org/10.1038/s41598-019-42446-w
We fabricated the stacked bilayer molybdenum disulfide (MoS2) by using reduced graphene oxide (rGO) as a spacer for increasing the optoelectronic properties of MoS2. The rGO can decrease the interlayer coupling between the stacked bilayer MoS2 and retain the direct band gap property of MoS2. We observed a twofold enhancement of the photoluminescence intensity of the stacked MoS2 bilayer. In the Raman scattering, we observed that the E12g and A1g modes of the stacked bilayer MoS2 with rGO were further shifted compared to monolayer MoS2, which is due to the van der Waals (vdW) interaction and the strain effect between the MoS2 and rGO layers. The findings of this study will expand the applicability of monolayer MoS2 for high-performance optoelectronic devices by enhancing the optical properties using a vdW spacer. 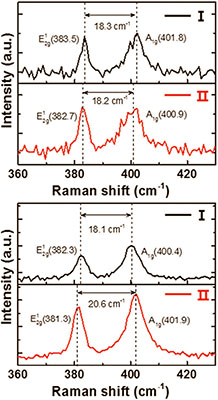 Vlček, J., Lapčík, L., Havrdová, M., Poláková, K., Lapčíková, B., Opletal, T., Froning, J. P., & Otyepka, M.
Nanoscale 2019, 11(7), 3229–3239
https://doi.org/10.1039/c8nr08994a
A broader and quantitative understanding of cell adhesion to two-dimensional carbon-based materials is needed to expand the applications of graphene and graphene oxide (GO) in tissue engineering, prosthetics, biosensing, detection of circulating cancer cells, and (photo)thermal therapy. We therefore studied the detachment kinetics of human cancer cells HeLa adhered on graphene, GO, and glass substrates using stagnation point flow on an impinging jet apparatus. HeLa cells detached easily from graphene at a force of 9.4 nN but adhered very strongly to GO. The presence of hydrophilic functional groups thus apparently enhanced the HeLa cells’ adherence to the GO surface. On graphene, smaller HeLa cells adhered more strongly and detached later than cells with larger projected areas, but the opposite behavior was observed on GO. These findings reveal GO to be a suitable platform for detecting cells or establishing contacts, e.g. between graphene-based circuits/electrodes and tissues. Our experiments also show that the impinging jet method is a powerful tool for studying cellular detachment mechanisms and adhesion strength, and could therefore be very useful for investigating interactions between cells and graphene-based materials.

Tip-enhanced Raman Spectroscopy (TERS)
Scanning Near-field Optical Microscopy (SNOM)
Have more questions? Contact us +7-499-110-2050
or fulfill a form and we will answer all your questions.
Ask an Expert