A confocal microscope differs from a "classical" optical microscope (see chapter 3.1) in the fact that every moment of time there is formed an image of one object point while a whole image is assembled by scanning (moving a specimen or readjusting an optical system). In order to register light from only one point, a pinhole aperture is situated behind the objective lens so that the light emitted by the studied point (red rays in Fig. 1b) passes through the aperture and is detected while light from the other points (e.g. blue rays in Fig. 1b) is at most excluded. The second feature is that the illuminator produces not the uniform lighting of the field of view but focuses light into the studied point (Fig. 1c). This can be done by placing a second focusing system behind a specimen; in this case, however, the specimen should be transparent. Moreover, the objective lenses are usually expensive enough, so utilization of a second focusing system for illumination is of little preference. An alternative is the use of a beam splitter for the purpose of incident and reflected light could be focused by the same objective (Fig. 1d). Besides, such arrangement facilitates system adjustment.

Fig. 1a.  Traces of light rays in conventional microscope. The photodetector receives light from various points of a specimen.

Fig. 1c.  Additional contrast increase is due to illumination light focusing into the analyzable point.

Fig. 1d.  Arrangement with a beam splitter simplifies the microscope construction and facilitates its adjustment due to the objective two-fold use
(for illumination and reflected light collection).

It is clear that the application of the confocal scheme should increase the image contrast because "stray" light from points adjacent to the studied one does not enter the detector. Note that the contrast increase is achieved at the expense of complicated scan by specimen or by light beam systems utilization. Detailed examination of existing confocal microscope designs is beyond the scope of this chapter. Further information on the matter can be found in reviews [1-11].

Resolution and contrast in confocal microscopy.

Now let us examine mathematically how and how much the contrast is changed when utilizing the confocal microscopy. Firstly, because the light in the confocal microscope passes through the objective twice, the point spreading function (designated further as PSF, see definition in chapter 3.1) is given by

or a photon detection from the point with coordinates

; then the confocal PSF is a product of independent probabilities. Fig. 2 shows a representation of conventional and confocal PSF. 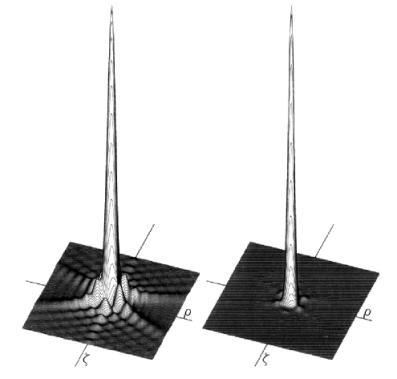 is shown on the right,
conventional PSF

If we use the Rayleigh criterion for the resolution (26% dip of the maximum intensity), the result is a slight increase in resolution for the confocal microscope:

as compared with the conventional optical microscope

However, the major advantage of a confocal microscope is a sufficient increase in the contrast rather than resolution improvement in accordance with the Rayleigh criterion. In particular, the relation of the first ring maximum amplitude to the amplitude in the center is 2% in case of conventional PSF in a focal plane while in case of a confocal microscope this relation is 0.04%. The practical importance of this factor is illustrated in Fig. 3. From the top part of the picture it can be seen that a dim object (intensity 200 times less than of a bright one) can not be detected in conventional microscope though the separation distance between objects exceeds that of the Rayleigh criterion. In a confocal microscope (bottom part of Fig. 3) this object should be well registered.

Fig. 3.  Intensity profiles for conventional (top picture) and confocal (bottom picture) microscopes.
Intensity maximum of the dim object is 200 times less than that of the bright one.

The intensity distribution along the optical axis in a confocal microscope is given by the following expression:

Then, using the Rayleigh criterion for the resolution in the direction along the optical axis we can write:

The effect of an aperture in a focal plane.

One of parameters, that was not taken into consideration above, is the size of an aperture in a focal plane of illuminating and collecting lenses. Notice that PSF for conventional and confocal microscopes was calculated under assumption that a source is point-like. Therefore the obtained PSF describe properties of an objective lens and the aperture image in the object plane determines areas whose light is registered by the photodetector. Lowering the aperture size obviously decreases the amount of the passing light, increases noise level and, finally, can reduce all advantages in the contrast to nothing. Thus, the problem of choosing the aperture optimal size and reasonable compromise is quite relevant.

In order to consider mathematically the presence of an aperture and to obtain a new function of intensity distribution one should perform convolution:

and for a confocal microscope to multiply the obtained function

. The resulting intensity distribution in case of the aperture size of 5 Airy disks is shown in Fig. 4. 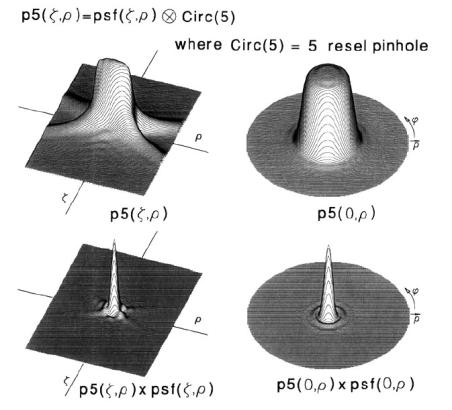