Measurements with variable temperature (from room up to 300°C)

Standard NT-MDT SI SPMs allow investigating a surface in temperature conditions from room one up to 150 °C. The modified AFM measuring head SMENA with heating stage provides the possibility of measurements with temperature up to 300 °C. This enables to observe the different high temperature processes, such as phase transitions (melting and crystallization, spin-reorientation transitions etc.). For example the transformation of domain structure of bulk crystal of cobalt (2 mm thick) during heating was investigated by magnetic-force microscopy (MFM). A considered sample has strong perpendicular magnetocrystalline anisotropy at the room temperature. The results are shown on Fig. 1-6. Fig. 1 corresponds to topography of investigated area (53x53mkm) at a temperature of heating stage T=190 °C. Fig. 2 shows domain structure of the same area (phase contrast). This image was obtained simultaneously with Fig. 1. Such domain structure agrees with that at room temperature. 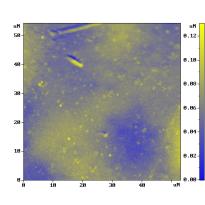 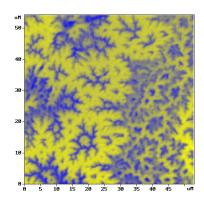 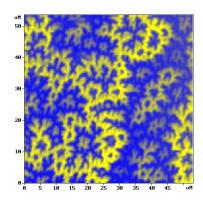 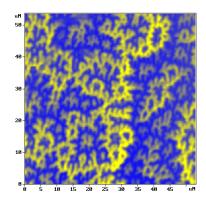 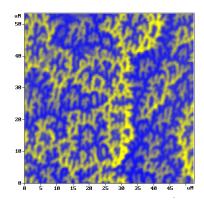 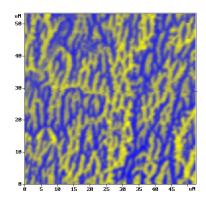 Other magnetic images were obtained at following temperatures of the heating stage:

The changes of domains of closure are clear seen. These domain changes are caused by change of a magnetocrystalline anisotropy: near 245 °C the uniaxial anisotropy transforms into the anisotropy with four easy directions («easy cone») [1,2]. The topography changes are not observed during experiment. The MFM response (peak-to-peak phase contrast) decreased during heating from 70 degrees (Fig. 2) to 12 degrees (Fig. 6). Both decreasing of magnetization and increasing of slope of easy directions that leads to reducing of the stray field can explain this fact. The drift in-plane direction equaled about 2.5 mkm for the experiment time (more than 1 hour) and temperature range from 190 °C to 250 °C.

Fig. 7 demonstrates the growth of a polypropylene spherulite at the temperature of the heating stage T=145 °C (scan 30mkmx30mkm). The measurements were performed immediately after cooling of the melt from temperature 180 °C. The growth of the central spherulite was initiated by cantilever oscillations at the central point of scan before measurements. It is clear seen the edge of the big spherulite (lower part of the Fig. 7), which started to grow before scanning. As a result it has bigger size than the central sherulite. These images were obtained at intervals of two and three minutes respectively. 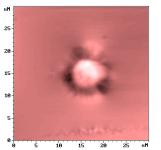 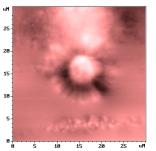 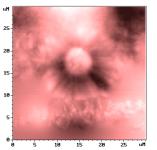 Measuring in vacuum and controlled atmosphere
Lithography with SPM
Have more questions? Contact us +7-499-110-2050
or fulfill a form and we will answer all your questions.
Ask an Expert