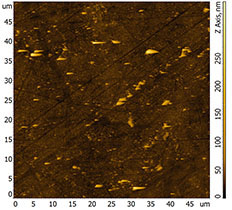 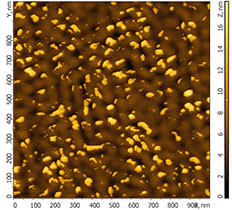 b)
Fig. 1. Topography images of the glass surface (a) and polymer PS-b-PMMA (b) when scanning parameters are not optimal. Images of large particles have defects looking as coma or “tails” and appeared because of probe detachment from the surface. The image of the polymer has a different type of defects, which manifests itself in the form of areas with a higher relief (light areas on the image), and are caused by switchs of the probe oscillation from the repulsion regime to the attraction regime 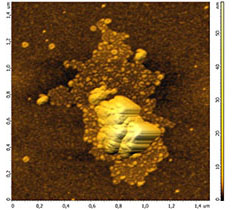 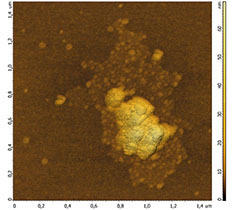 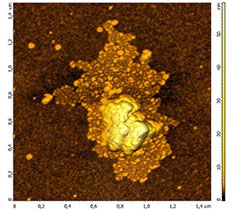 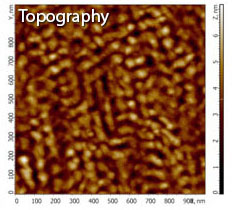 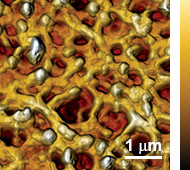 The module has a user-friendly interface which allows the straight forward launching of the imaging procedure (Fig.5). To run a measurement, an attractive or repulsive scanning regime is chosen and then the scan is started. Fig.5 The interface of ScanT™.

At the same time all image quality indicators and advanced controls are still available for experts who want to be kept informed during the scan.

The GTransformTM algorithm built into the program allows eliminating the “parachuting” defects in the topography image. As a consequence, an acceptable result can be obtained from the image of the moderate quality (see fig. 5). 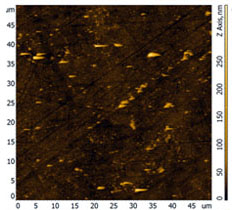 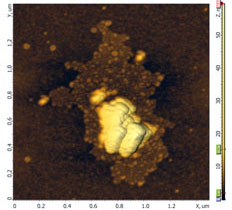 Fig. 6. Topography image before and after correction of the "parachuting" effect by using the GTransform™. The GTransform™ eliminates the "tails" arising due probe detachment from the object surface with a steep slope

In addition, the GTransformTM algorithm allows extracting substantial information from a scanned image. Indeed, the images of phase contrast, spreading current or lateral forces contain, along with information related to the heterogeneity of the surface properties, also the contrast induced by the topography. In some cases this can significantly mask the map of measured surface property heterogeneity. Figure 6 shows how GTransformTM removes or significantly reduces the distortions of phase contrast images caused by surface topography making contrast produced by material property inhomogeneity more pronounced. 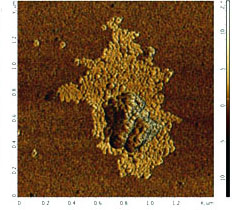