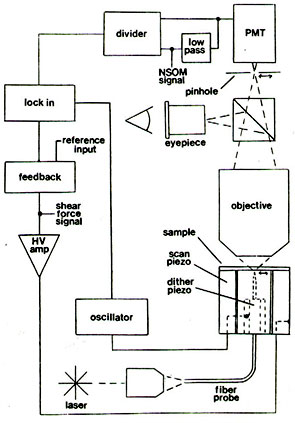 The resolving power of classical optical microscopes is restricted by Abbe's diffraction limit to about to one-half of the optical wavelength. However, it is possible to overcome this limit.

If a subwavelength hole in a metal sheet is scanned close to an object, a super-resolved image can be built up from the detected light that passes through the hole. Scanning near-field microscopy based on this principle was first proposed by Synge [1] and demonstrated at microwave frequencies by Ash and Nicholls [2] with a resolution of l/60 [3]. At visible wavelengths this principle (optical stethoscopy, near-field optical-scanning microscopy, SNOM) was demonstrated by Pohl et al [3, 4]. In [5] Betzig et al they have demonstrated using fiber probes to image a variety of samples with a number of different contrast mechanisms.

To make the system easier to use and to extend its applicability to samples of arbitrary topography, it would be advantageous to have a distance regulation mechanism capable of automating the initial approach and maintaining the aperture at a fixed distance from the sample over the entire course of a scan. Several mechanisms have been proposed previously to SNOM and related evanescent field techniques, including electron tunneling, capacitance, photon tunneling and near-field reflection.

At present the most-used method of probe-sample distance regulation relies on the detection of shear forces between the end of the near-field probe and the sample [5]. Shear Force based system allows Shear Force Microscopy alone, or simultaneous Shear Force and Near-Field imaging, including Transmission mode for transparent samples, Reflection mode for opaque samples and Luminescence mode for additional characterisation of samples.

Have more questions? Contact us
or fulfill a form and we will answer all your questions.
Ask an Expert